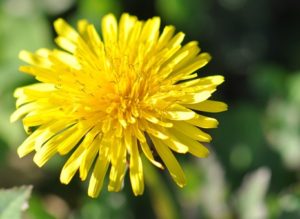 Dandelion (Taraxacum officinale) is one of the most controversial plants. Considered by some a pesky weed, it is the bane of those gardeners who enjoy spotless, green lawns and of those people who suffer from allergies. However, this “weed” introduced to North America by the European settlers for its medicinal powers is everything but a weed. Not only is the plant edible in its entirety, it is also used as a potent herb for a variety of purposes.
The name dandelion derived from the French dent de lion or Lion’s tooth as its jagged leaves resemble teeth. While universally hated by gardeners, it is a delight to children, who enjoy blowing the seeds into the air, innocently helping spread the seeds that will allow more plants to grow.
Interestingly, many traditions deeply rooted in the folklore involve the dandelion and its seeds. For instance, while some believe that the dandelion seeds will carry their thoughts away to a loved one, the Victorians used the dandelion as a symbol of love. Some refer to the dandelion as a “shepherd’s clock” or a “fairy clock” because the flowers open with the first light of day and close at dusk. Others insist that they can predict the weather using dandelion seeds as reference, since the seeds will extend in good weather and remain closed when it rains.
Legends aside, dandelions are versatile plants whose leaves and flowers can be used as food in salads, stir fries and soups. The flowers are used to make dandelion wine and the roots can be roasted and ground to be used as a substitute for coffee.
Dandelions also have many medicinal virtues. The leaves contain vitamins like A, C, and K and minerals, like calcium, potassium, iron, and manganese. In Chinese medicine dandelion was used to purify the blood and boost the immune system.

Drinking dandelion tea has many health advantages. It is frequently used as a diuretic, as it allows the liver to eliminate toxins more efficiently and it helps reduce uric acid, and stimulate urination so that it can be used to fight urinary tract infections. It is also helpful for people who suffer from diabetes because it can stimulate the production of insulin, keeping the blood sugar level low. It can be used to aid digestion and support the liver and to improve calcium deficiency and promote bone health naturally, as it is rich in calcium. Because it is rich in antioxidants, dandelion can also be used to prevent cancer.
A word of caution: Be careful when gathering dandelions. Always gather wild dandelions, as those that grow in gardens and other urban areas are polluted with pesticides.
Finally, for those who are not convinced of the healing power of the dandelion, here is another reason to let it grow in the garden. The dandelion plant is beneficial for gardening because its deep root system helps bring up nutrients for plants with shallow roots, it adds minerals and nitrogen to the soil, and it attracts very important pollinating insects.
Love your dandelions!