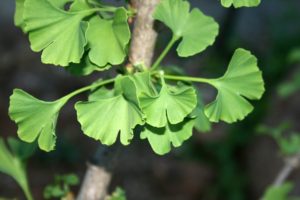 The Gingko, that Eastern tree,
In my garden plot now grows.
In its leaf there seems to be
A secret that the wise man knows.
Is that leaf one and lonely?
In itself in two divided?
Is it two that have decided
To be seen as one leaf only?
To such questions I reply:
Do not my love songs say to you–
Should you ever wonder why I sing, that I am one yet two?
– Johann Wolfgang von Goethe (trans. Anthea Bell)

One of the oldest tree species in the world, ginkgo biloba, also known as maidenhair tree, is native to China, but nowadays it can be found all around the world. This deciduous conifer can live up to a millennium and reach heights of 40 meters. Its leaves are composed of two or more fan-shaped lobes, hence the Latin name biloba (“two lobes”).
The fruit of the ginkgo tree has been used, together with the leaves, in traditional Chinese medicine for thousands of years to treat digestive ailments, circulatory problems, and memory loss, among others.
In Western medicine, ginkgo is mainly used as a concentrated extract made from the dried green leaves of the tree. The leaves contain flavonoids and terpenoids, which are antioxidants that help fight free radicals in the body. Emerging modern day research shows that ginkgo is beneficial in the treatment of dementia and Alzheimer disease. I is also used to improve concentration and blood circulation. According to the University of Maryland Medical Center, research suggests that ginkgo may protect damaged nerve cells and have a positive effect on memory, and the Mayo Clinic states that ginkgo extract is beneficial in the treatment of symptoms related to insufficient blood flow to the brain, general anxiety disorder and schizophrenia. Although more scientific research is needed, gingko appears to be also beneficial in the treatment of a wide variety of ailments and diseases, such as asthma, ADHD, depression, autism, claudication, fibromyalgia, erectile dysfunction, glaucoma, and many more.
You can also enjoy ginkgo dry leaves in the form of herbal tea and consume about three cups a day (with or without a teaspoon of homemade stevia water to sweeten it), but in order to fully enjoy ginkgo’s benefits, you can take it as a tincture. At Herbalitea we offer both, the loose leaf tea and the tincture, as well as a variety of other medicinal teas.

Here is a recipe to make your own tincture:
Place 150 grams of dried ginkgo leaves in a glass jar and add 500 ml of vodka. Store it in a dark place for a month, shaking the jar daily. After a month, strain the leaves and store in a glass container. Take one teaspoon a day.

A word of advice: Although ginkgo is considered a safe herb, always consult with a medical practitioner or herbalist before taking it (or any herbal remedy), especially if you are taking other medication, such as blood-thinning drugs, have epilepsy, are scheduled to have surgery, or if you are pregnant.