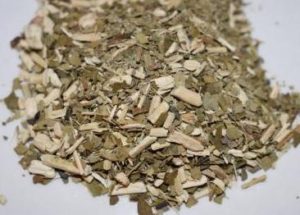 Called “The Drink of the Gods” by the Guarani and many other indigenous South American cultures and “The Green Gold of the Indios” by the Spaniards who settled there, yerba mate (ilex paraguariensis) is made from the dried leaves of a perennial small tree native to Argentina, Brazil and Paraguay. The name derives from the Quechua words mati, which means gourd and yerba, meaning herb. Mate is an infusion traditionally made with yerba mate and warm water in an empty calabash gourd and drunk through a straining straw. It is a social drink usually shared with friends as well as a powerful herbal tea loaded with medicinal properties.

According to The Pasteur Institute and the Paris Scientific society in 1964 yerba mate contains “practically all of the vitamins necessary to sustain life.” Rich in vitamins (A, C, E, and several B vitamins), minerals (Calcium, Manganese, Iron, Selenium, Potassium, Magnesium, Phosphorus, and Zinc) and powerful antioxidants, yerba mate is a stimulant, much like coffee. However, unlike coffee, it contains matein, a natural substance that stimulates the nervous system, increasing energy levels and concentration and fighting physical and mental fatigue, without coffee’s side effects.

Yerba mate is also used as a digestive tonic used to treat constipation, diarrhea, and indigestion. It is said to reduce appetite, so it is widely used by people who want to lose weight. It is proven to reduce bad cholesterol (LDL) and triglycerides and lower blood pressure. It has even been shown to fight cancer and other inflammatory diseases by boosting the immune system.